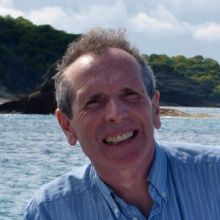 Completely self-taught, I first picked up the paintbrush as a toddler as I played with the paints and brushes left behind by my father who died too soon for me to remember him. He too was an artist, and I started by copying his many sketches and paintings that decorated our home. How I loved his rich vermilion, his glowing sunset painting of the Taj Mahal, and his fine pen and ink work! Just this, combined with avid reading of the art books he had won as a student was the extent of my early training; the rest was just there - in the genes.
Although I went on to study and teach foreign languages, I never stopped painting, and my love of art as well as language took me to the greatest cultural honey pots of Europe, not least Vienna, where I later taught but a stone's throw from some of the world's greatest museums. Here I took every opportunity not just to perfect my language, but to immerse myself in everything to do with art and music.
Back in England a decade or so later, I consolidated my interest in style and architecture by studying for a Diploma in Interior Design.
After 25 years of a portfolio career as teacher, artist and company director I decided in 2003 to focus on my first love of painting, and to give it a peculiarly nautical twist: since early childhood I have been fascinated by the great liners and their exotic destinations, and now love nothing more than to be at sea, sketchbook in hand, eager for new horizons and new inspiration.
I have had a number of solo and shared exhibitions in both municipal and private galleries, and have exhibited widely from Devon to the Lake District, with examples of my work acquired by private collectors all over the world.
Since 2006 I have been a regular guest lecturer for a number of cruise lines, and in 2016 became a fully accredited speaker for the Arts Society (formerly NAFDAS), offering approximately 30 lecture topics on art history and related topics.